We are not prepared to meet the coming solar panel crisis.

Does this mean we would like to meet the crisis but we are not in a position/ not ready to do so?

Or does it mean we are unwilling to meet the crisis?
at August 19, 2020 No comments: 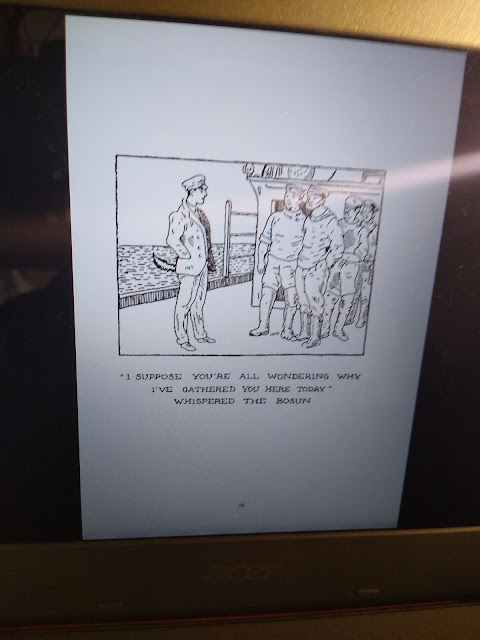 I knew that Stephen King considered "Last night I dreamt I went to Manderley again" Daphne du Maurier's Rebecca) to be the best opening line of any novel, and I agree with him. What I didn't know was that this is an iambic pentameter, and the last line of the book, "And the ashes again blew towards us with the salt wind from the sea" is also in metrical form; almost but not quite an anapestic tetrameter"(Wikipedia).

Last night I dreamt I went to Hill House again. Also in attendance were my mother (Mose) and my brother and sister. More surprisingly, my dear friend Germaine was also of the party. She is now 98 years old and I spent much of the night and my dream trying to caculate how old Mose would be if she were alive today. Eventually I worked out she would be 111.

Things started off well enough but gradually grew more tense as none of us could think of anything to say to Germaine and we were all quite relieved when my brother most kindly offered to drive her home - a very stout gesture when one considers that the journey from Essex to Dijon takes at least seven hours. (At the moment it would take four weeks longer when one factors in the two weeks Germaine would have to spend in quarantine after alighting in the land of our "nearest and dearest friend", in the words of Boris Johnson.)

The dream ended with my brother leaving Germaine  in the local friendly Lidl supermarket before setting off to England and the prospect of another two weeks in quarantine.

A new study, once again involving consenting Sprague-Dawley rodents, suggests that a physically taxing job may be bad for our brains. It finds that men and women who considered their work to be physically draining tended to have smaller memory centres in their brains and lower scores on memory tests than other people whose jobs felt less physically taxing.

I don't get it. For years, we have been told that physical exercise is good for the brain; indeed it was on the strength of studies such as these that I decided to take up marathon running some 40 years ago, with results that are only now becoming apparent.

In this particular study, 200 oven-ready rodents were invited to engage in ski-jumping for a period of three weeks, and the impact on their brain when they hit the ground after leaps of 50 metres or more was carefully measured. The study was conducted by Gretchen Reynolds and the Health and Well-Being Unit of the New York Times. The RAC was in charge.

And the results? Allowing for the usual drop-outs and regrettable but inevitable fatalities, 95% of the remaining rodents said that neither of them would be consenting to further studies.


KEYWORDS AND PHRASES
Robust - Guided by the science - earth-beating - Oven-ready - Robust - Fit for purpose - The Government is fully committed - Robust - The Prime Minister is very clear - If there has been foul play on the benches of the House of Commons, the Prime Minister wants to be the first to know about it.

That last phrase reminds me of that wonderful Glen Baxter cartoon which I purloined a long time ago. 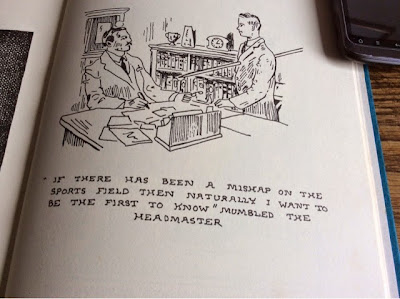 In my usual frivolous way, I was about to write something harmless about a dream I had recently. I abandoned the idea not so much because I know that dreams are not of the slightest interest to anyone except the dreamer himself and possibly his therapist (for a fee), as because I came across two documentaries on the BBC and a long article on the BBC website that stopped me in my tracks.

The first documentary was about the disastrous Iraq War which, to my undying shame, I was blinkered enough to support at the time. How could I have been so criminally and unpardonably stupid?

The second one described the Rupert Murdoch dynasty. The harm this obnoxious man has done to political and social life in Britain, the USA and beyond is truly incalculable.

The last and most horrendous of all was this horrifying account of what's happening to the Uighurs in China.

https://www.bbc.co.uk/news/resources/idt-sh/China_hidden_camps
at August 05, 2020 No comments:

After a sticky start, Darrell settles down well at Malory Towers. Her parents have every reason to be proud of her, and she eventually covers herself in the personal, scholastic and sporting glory that was originally expected of her. Each year she is voted the girl most likely to: head of the fourth form and games captain of the fifth. She is a successful tennis, lacrosse, weight-lifter and netball player, and the general feeling is that she will become Head Girl - leading on to a position of great prestige and influence in the outside world and beyond - in her last year at good old Mal Towers.

Things only start to go wrong for Darrell  when she spends her hols on the French Riviera and falls in with a disreputable set "hanging out" in the Monte Carlo area. Much to her parents' distress, she develops a nasty drug habit and becomes experienced in other activities which I cannot bring myself to mention here. Her work begins to suffer and she fails to win a coveted place at Strathclyde University to study Theology and Colonial Administration.

Cast out by her family, she eventually decides to make a fresh start in a foreign country, signing on as an EFL teacher (a dead-end job if ever there was one) at the Berlitz School in Lyon.

Where was I?
I've got a good idea for a blog entry, but just before I get started, I think the least I can do is ask my wife if there's anything she would like to drink. Sure enough, she would be partial to a cold coffee. Would she care for anything to eat? A Wasa perhaps? No thanks. But that got me thinking: would I like a Wasa myself? Well, now that I think about it, why not, even if it temporarily distracted me from my post. I was anxious not to scatter bread crumbs all over the place, so I stepped outside for a moment. My goodness, it's hot! I read somewhere that by 2050 or the end of the century, we will have lost 1% of the earth's inhabitable surface with consequences it scarcely bears thinking about.


Now where was I? I'll come back to me in a moment. In the meantime, it would be nice and soothing to listen to some music.Cat Stephens in one of his later iterations? Very nice and, if I may say so, very peaceful too.Unfortunately, it gets stuck in a groove after a while, so there's nothing for it but to get back to the task in hand - UNLESS, it comes to me all of a sudden, I watch the end of last night's Newsnight with Kirsty Walk. She's the less acerbic presenter who takes over from Emily Maitlis as we lead into the weekend. Back in a moment.
at July 25, 2020 No comments: